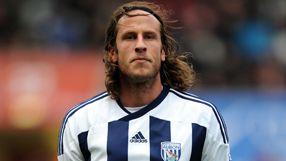 Olsson, described as a "key player" by sporting director Dan Ashworth, joined Albion in 2008 and was appointed vice-captain in 2009.

"He's a tough, uncompromising central defender who knows all about the Premier League. Jonas is also a very important character and leader in our dressing room," manager Steve Clarke told the club's website.

Olsson has helped sixth-placed Albion make their best start to a Premier League season, with three wins and two draws from their first six matches.