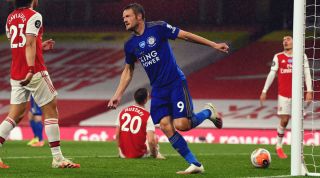 Before Ian Rush turns up to give us a dressing down: we all know that football wasn’t really invented in 1992.

Each of these players have hit the magical mark of 100 Premier League goals, from well-travelled strikers to one-club men. Only a few are still playing in the Premier League, but two of those in particular are muscling their way up this table and into the pantheon of all-time greats.

To celebrate a certain Leicester City hero joining the club last night in north London, can you name the Prem's most famous marksmen?