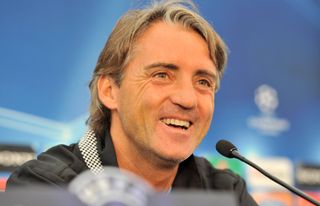 The Italian had joined the club in December 2009, replacing Mark Hughes, but was sacked 10 months after signing his new contract.

Here, the PA news agency looks back at the reasons for Mancini’s contract and Manchester City’s achievements under the Italian.

The club had just won their first league title since 1968 in dramatic fashion with Sergio Aguero’s stoppage-time winner sealing a 3-2 win over QPR to claim the title on goal difference over Manchester United.

The Italian manager had overseen the club’s rise to the top of English football, starting in 2011 when they won their first piece of silverware in 35 years with the FA Cup.

Although reports had linked Mancini to the vacant Russia manager job, the Italian signed a new long-term contract in Manchester with the focus placed on competing for European honours.

What did they say?

After the announcement, Mancini said: “I am delighted to be able to give all of my efforts to Manchester City for a further five years.

“The opportunity that exists to build on our recent success is enormous. Manchester City is a fantastic football club, from the owner, chairman, board and the executive team, through to the players, staff and fans. I am very much looking forward to the challenges ahead.”

Where did it go wrong?

Less than a year after signing the new long-term contract and exactly 365 days after lifting the Premier League title, Mancini was sacked and replaced by Manuel Pellegrini.

Despite reaching the FA Cup final in 2013, City were off the pace in the title race, which was won by local rivals United by 11 points, and the owners said he had failed to meet his targets aside from qualifying for the Champions League.

The Italian was in charge of City for three-and-a-half years, and won the FA Cup in 2011 and the club’s first top-flight league title for 44 years in 2012.

In his final season, however, Wigan beat City in a shock result in the FA Cup final and the club had also exited the Champions League in the group stages.

It was Mancini’s record in Europe which ultimately led to the board taking the decision to replace him, with the club eliminated at the group stages during their two consecutive seasons in the competition.

In the 2012-13 season, City won none of their six group-stage matches, having finished third in the round-robin the year before.

Since leaving City, Mancini has managed three clubs and is the current manager of the Italian national team.

In September 2013, he took over at Galatasaray, where he spent one season, winning the Turkish Cup, before returning for a second spell at Inter Milan the following year. He spent two years at the San Siro.

After less than a year at Zenit St Petersburg, Mancini took over the national team with the task of rebuilding a side which failed to reach the 2018 World Cup and guided Italy to Euro 2020 qualification before it was postponed until 2021.