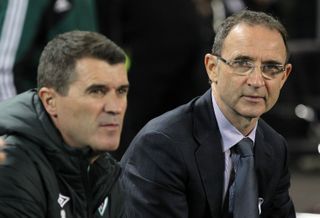 The duo were able to celebrate a winning start as Robbie Keane, Aiden McGeady and Shane Long scored in a one-sided friendly in Dublin.

Former Sunderland boss O'Neill saw plenty of reasons to be optimistic as the Republic dominated and should have won by a more emphatic margin against a poor Latvia side.

He told Sky Sports News: "I'm delighted with the team, it was a good performance. There will be sterner tests ahead, we know that. We played some lovely football, the crowd were terrific and it was an exhilarating evening.

"The first goal is always important and we got that. Then we played a lot of balls in front of them without causing too many problems. We then got it back and scored an excellent second goal and then got the third. Overall I'm delighted with them."

O'Neill was reluctant to pick out individuals for praise, but he felt winger James McClean was particularly impressive.

"James McClean got the man of match from whoever makes that decision and I wouldn't disagree with that, I thought he was fantastic," O'Neill added. "But there were a lot of good performances and too many to mention."

John O'Shea welcomed the arrival of O'Neill and Keane following a comfortable night for the defender.

The Sunderland defender said: "They are two natural winners and want the game played the right way.

"There were plenty of pleasing points and I look forward to a tough game in Poland."