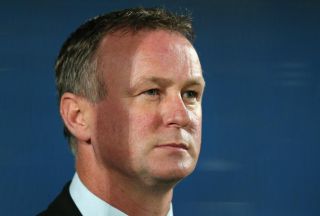 The visitors were poor in Nicosia, with Martin Paterson's early close-ranger header their only real chance against an otherwise untroubled home side.

O'Neill was without several regular starters on Wednesday, including Jonny Evans, Aaron Hughes, Chris Baird and Corry Evans - but it was the absence of Lee Hodson that was most keenly felt.

The Watford youngster has played at right wing-back for his country as O'Neill has sought to utilise a 3-5-2 formation, but the long list of unavailable players led to a new system that failed to produce the goods against a nation ranked 122nd in the world.

"We've tried to build a system to play with 3-5-2," O'Neill told BBC Sport after seeing his side finish the game with 10 men following Gareth McAuley's late dismissal.

"We weren't able to do that in this game because we didn't have anyone available to play on the right-hand side of the pitch, in that wing-back role, so the system that we played tonight, particularly away from home, I wouldn't play again.

"We tried to play very offensive with the two attacking midfield players and the three front players and it probably isn't right for us, particularly away from home."

The match marked a 10th consecutive away friendly without a goal for Northern Ireland, a run stretching back to 2006.

It is a barren spell that rarely looked like coming to an end in the Cypriot capital, and O'Neill was less than impressed with the quality on show, though he had no complaints about his team's spirit.

"I felt we started not too bad, created a couple of good opportunities," he added. "But we deteriorated a bit after that, we gave possession of the ball away too easily and we invited pressure because of that.

"I thought second half we were better - not in any great way or fashion - we created a couple of half chances and we maybe could have done better.

"And then obviously we have to play the game with 10 men. But the spirit and the work rate was good, we have to commend the players on that.

"The fact that we got the 17 payers on the pitch and we got people game time was important, but the actual level of performance was disappointing."

Northern Ireland face Uruguay in May and Chile in June before getting their UEFA Euro 2016 qualifying campaign under with a trip to Hungary in September.