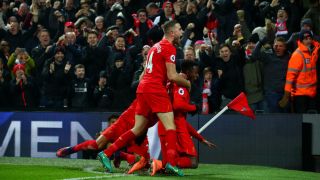 Divock Origi felt Liverpool's patience was rewarded as they left it late to beat Sunderland at Anfield.

The Belgium international, a first-half substitute for the injured Philippe Coutinho, curled home the opener with 15 minutes to go before James Milner added an injury-time second from the penalty spot.

Sunderland battled hard but Liverpool fully merited the win to move back above Manchester City at the Premier League summit on goal difference. Chelsea can leapfrog them both with victory in the late game against Tottenham.

"We played with big hearts and pushed and pushed," Origi said. "The crowd helped us and we were all motivated to get the three points and they were well deserved.

"The manager said before the game we had to stay patient. He said if we played like that the whole game we would win."

Origi has struggled for playing time this season and was disappointed his chance came on Saturday due to a nasty-looking injury to Coutinho, the Brazil playmaker carried off on a stretcher following a collision with Didier Ndong.

"I hope he's okay because he's a very important player for us. Everyone likes him as a person as well and I wish him all the best. Hopefully it will be okay," Origi added.