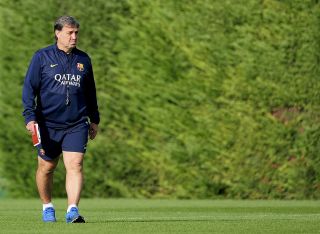 The La Liga leaders have made a perfect start to their title defence with eight wins from as many matches.

Osasuna come into the meeting on the back of a 1-0 win over Malaga before the international break and Martino is planning for them to play a similar pressing, aggressive style.

"I expect to play an aggressive Osasuna," Martino said.

"They're a team that has improved in their last matches, getting positive results and the last victory away against Malaga has given them a lot of confidence.

"You always need a match like that to act as a starting point to make things more comfortable. And they have done. I think that is a team that will put pressure on us.

"Obviously after that, it's all about what Barcelona does and where we take the game to our rivals, but definitely, I think they will come to press us, not to let us play from the beginning.

"And we will try to correct that situation and have the ball as much as possible so they don't hurt us on the counter-attack."

Barca captain Carles Puyol returns after seven months out with a serious knee injury, while Javier Mascherano and Lionel Messi also come back.

Martino described Puyol's return as a 'big joy', with the defender likely to come off the bench at Estadio El Sadar.

"I think that for everyone it is a big joy – even more after such a long period of inactivity," Martino said of Puyol.

"Obviously, during the last week he has been more anxious as he was getting closer to coming back.

"And before walking onto the pitch, when I select a player before a match, I do it because I think he is ready to play.

"After that, he may play or he may be put on the bench, but I don't like the idea of 'giving minutes', I would rather prefer to think that he is fit to play and if in any moment has to play, he does it properly.

"But the decision is always from the point that the player is ready to play."