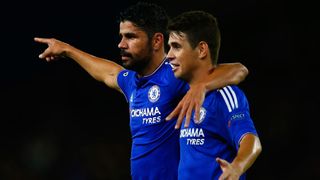 Costa, 28, is widely expected to make a move from the Premier League champions in the off-season, having been heavily linked to Chinese Super League (CSL) side Tianjin Quanjian.

Oscar, who made the move to Shanghai in January, said he would be thrilled to see Spain international Costa join him in China.

"It's hard for me to give specific advice to Costa. The only thing I can tell him is that I quite enjoy my life in China," Oscar told CCTV-5.

"I don't have any problems so far. The culture here is obviously very different from that of my country, but we are getting used to it, bit by bit.

"Everyone has got to figure out the things he wants most. And I believe coming to China is the best choice for me.

"If Costa moves here, I will be delighted. He is pursuing happiness and I hope everyone has a happy life."