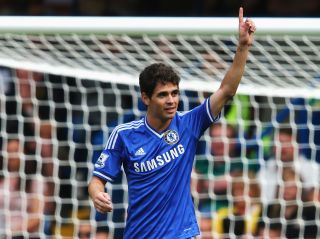 The 21-year-old is keen to build on a strong debut season, which saw him score four goals in 34 league appearances, and he is ready to add to his tally this time round.

Jose Mourinho's arrival has not stunted the Brazil international's first-team chances yet, with Oscar starting all four of Chelsea's games so far this term, scoring in their season-opening win over Hull City.

But for Oscar, things can only get better and he is eager to be a part of a Chelsea team that can challenge for silverware once again having lifted the UEFA Europa League last term.

"I feel a lot more confident this year and I am sure that I am going to score a lot more goals," he told the club's official magazine.

"I am ambitious for this season and I am happy with the way things are going for me at the moment. We have started well and I want to make sure that this is a big year; a year in which Chelsea win titles.

"I started my first season well and the other players welcomed me and helped me to develop, all of which helps me and contributes to this season.

"Now, I am feeling even stronger and I would like to play as many games for the team this year as I did last year."

Oscar will now turn his attention to his upcoming international duties, which will see Brazil take on Australia on Saturday and Portugal three days later in friendly matches.