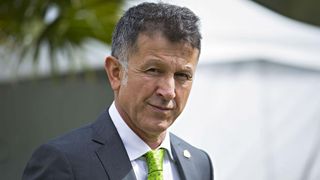 Juan Carlos Osorio took over the Mexican national team in the late part of 2015 but the manager, known for his planning, already has some ideas about 2018.

The coach was handed a target of finishing the fourth round of World Cup qualification unscathed, but while his focus is on 2016, the team is planning for the main event set to take place in Russia in two years.

There are between 12 and 15 "elite players" who make up the core of the Mexican team, Osorio said, but there are a number of young prospects the manager and his staff are keeping an eye on.

The Colombian coach already has shown a willingness to try players in positions different from the ones they play at their clubs. In the two World Cup qualification matches Osorio oversaw, Porto left back Miguel Layun has lined up at right back. The manager said he won't hesitate to experiment with the younger players as well.

"We hope to have some of them to get to know them better, to try them out and have them train in their natural positions where they play in their clubs, but also within the profile of every one as a player to try them at other positions, to get them ready for the other match scenarios that we think are necessary," he said.

Fans haven't had much time to understand exactly what Osorio thinks is necessary or what his tactics might look like long term. The 53-year-old said he enjoys the general style of Mexican players but also sees some alterations he might be able to make.

"In Mexican soccer, there’s a lot of compatibility in a player, the offensive attitude that they have before the match, that you have to attack, to find chances, to be in control of the game, to look for the result, to play equal against whatever rival," he said. "We identify with this this way of seeing soccer.

"Under this look, we think that it’s good that Mexican soccer goes out to attack, to be brave, but don’t confuse this with being arrogant or conceited. We have to respect every rival, but yes we have what we need to have to compete on the same level with anyone."

Osorio will soon call a roster for a February friendly against Senegal in Miami before El Tri return to World Cup qualification in March with a pair of matches against Canada.