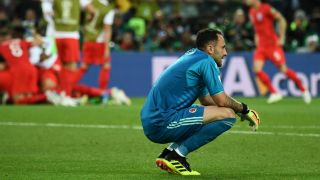 Goalkeeper David Ospina believes Colombia can walk away from Russia with their heads held high after their elimination from the World Cup.

The South Americans drew 1-1 with England in their Round of 16 fixture, but they were knocked out of the tournament after a dramatic penalty shootout.

Ospina, 29, saved from Jordan Henderson before misses from Mateus Uribe and Carlos Bacca proved costly, and said he remained proud of Colombia’s performance.

“We’re going [home] sad, but now is the time to raise your head,” he told Mundo Deportivo.

“[The team] left every ounce of sweat. We are running out of the adventure at the World Cup, but we are leaving with a clear conscience that we gave it everything on the field.

“As it is said, it is a lottery, there was fortune [saving Henderson’s penalty] at first, but then two failed and that’s how it is.”