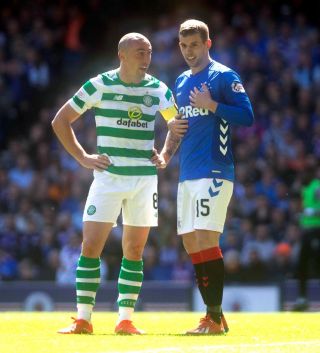 Gers chiefs insist they will “vigorously defend” Flanagan after the full-back was handed a notice of complaint for elbowing Celtic captain Scott during their 2-0 Ibrox win.

Three former category one match officials all agreed Flanagan was guilty of violent conduct, meaning he faces a two-match ban.

But, while he is now set to miss the final match of the season against Kilmarnock at Rugby Park and the first game of next season, unless Flanagan can overturn his ban at a Hampden hearing on Thursday, Simunovic will be free to play for Neil Lennon’s men as Celtic lift the Ladbrokes Premiership trophy after Sunday’s clash with Hearts.

The Croatian centre-back was involved in an off-the-ball collision with Light Blues front man Jermain Defoe midway through the first half but no action was taken by Clancy.

Now Ibrox chiefs have demanded to know why their man has been dealt with by disciplinary bosses and Simunovic has not.

In a statement given to Press Association Sport, a spokesman for Rangers, who have already seen goalkeeper Allan McGregor retrospectively punished for an incident with Aberdeen’s Lewis Ferguson that was seen at the time by referee Bobby Madden, said: “Once again, there seems intent to change the decision of a referee in a match involving Rangers.

“There seems to be a steady erosion of respect for Scotland’s referees and the authority they are meant to enjoy under rule five of the laws of the game.

“The decisions of referees regarding facts connected with play are meant to be final, but referees are now routinely invited to change their decisions after a game has finished.

“It is particularly shocking that another Rangers player has been singled out for retrospective action and issued with a notice of complaint, while Jozo Simunovic, the Celtic player who used an elbow to fell Jermain Defoe, has escaped any kind of censure.

“Why did one incident escape punishment while the other is now deemed worthy of a red card?

“We cannot understand how these two incidents could be studied yet only one be considered worthy of punishment.

“It seems as if Rangers’ players are being held to a different code of conduct from players at other clubs.

“We shall vigorously defend Mr Flanagan and have also asked for full transparency on what matters are brought forward for retrospective action. Are those decisions being made even-handedly?”

Celtic declined to comment on Rangers’ statement, while Press Association Sport has contacted the SFA for a response.

Celtic manager Neil Lennon was adamant Flanagan should have been sent off for his clash with Brown.

Speaking after the game, Lennon said: “It’s a red card. Again. How the referee has not given that as a red card I don’t know. It’s an elbow into his face.”

Flanagan will become the fourth Rangers player to be hit with a suspension for incidents involving Brown in two games if his appeal fails.

Alfredo Morelos was sent off for elbowing the Celtic skipper and Ryan Kent got a retrospective ban for striking the midfielder in the previous encounter.

Andy Halliday received a second yellow card after that game for confronting Brown over his post-match celebrations, incurring a ban that allowed Flanagan to regain his place in the starting line-up.