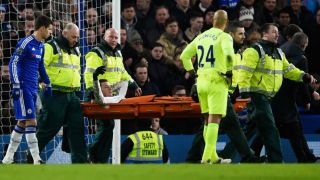 Everton manager Roberto Martinez has cleared full-back Bryan Oviedo of any significant injury after he was stretchered off during his side's dramatic 3-3 draw with Chelsea on Saturday.

Oviedo was injured the 71st minute of the game and required lengthy treatment.

He was taken off via a stretcher and replaced by Ramiro Funes Mori, who scored Everton's third.

Chelsea captain John Terry would later score in the 98th minute from a seemingly offside position, ensuring the contest ended in heartbreak for the Everton faithful.

But as disappointed as Martinez was after the game, he at least had good news to report on Oviedo, with early signs suggesting the injury should not keep him out for long.

"Bryan’s injury is not serious and he should be ok," he said.

"We will assess him over the next 24 hours.

"It was more a knock rather than anything else. We expect that Bryan will be ok."

Oviedo took to Twitter to reassure his fans, tweeting: "Great game today, it hurts not have gotten the win. Do not worry, I'm fine it was just for caution."