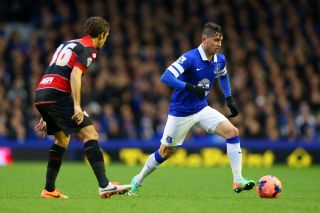 Oviedo underwent an operation on his left leg on Monday to repair the double fracture he sustained when he made what appeared to be a routine tackle during Saturday's FA Cup fourth-round clash at Stevenage.

The 23-year-old is now facing a race against time to prove his fitness for Costa Rica ahead of the World Cup later this year but is determined to be in Brazil for the showpiece.

"Ever since it happened, I've been thinking about the World Cup," Oviedo told the club's official website.

"I have to remain calm but, in the hands of God, I will be ready for it.

"If I am back in time for the finals, then great. But, if not, then the world won't stop turning. I have already missed a tournament through injury before.

"You learn from experiences like this. You take knocks in life but the key is to be strong and to fight back."

Oviedo has confessed that he does not plan to watch footage of the incident that resulted in his serious injury.

He added: "I have tried to stay strong and positive but I don't want to watch the video of the incident.

Everton, meanwhile, have recalled defender Luke Garbutt from a loan spell at Colchester.