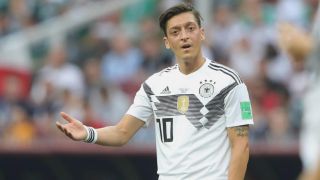 Mesut Ozil and Sami Khedira have been axed by Joachim Low for Germany's crucial World Cup showdown with Sweden in Sochi.

However, Low dropped Ozil for the game after 26 successive starts in major tournaments, with Germany's World Cup status in the balance.

Khedira was also benched following a forgettable performance against Mexico for the world champions, with Marco Reus and Sebastian Rudy named in the starting XI.

A neck injury, as expected, forced Mats Hummels out of the side, with the experienced defender replaced by Antonio Rudiger, while full-back Marvin Plattenhardt made way for Jonas Hector, who missed the Mexico loss through illness.

There was talk veteran striker Mario Gomez could join Timo Werner up front in a 4-4-2 formation but Low resisted the temptation to sway from his usual 4-3-3 system.

And the players are out inspecting the pitch.Germany played in Sochi four times en route to winning last year’s Confederations Cup.June 23, 2018