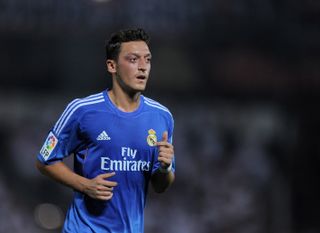 The German playmaker has been strongly linked with a departure from the Bernabeu of late, with the signing of Isco from Malaga thought to have put his position under threat.

But Ozil, who has been linked to Premier League duo Arsenal and Manchester United, has claimed he has the full backing of new coach Carlo Ancelotti and wants to remain in the Spanish capital.

"The coach has confidence in me and I feel very good," he said. "I want to be successful.

"A lot has been written in the media about other teams, but I have a contract with Real Madrid and I am staying here. I have the coach’s confidence and I feel very good.

"Also, I have a contract until 2016. I have a very good understanding with all my teammates and it is a pleasure and an honour to play for Real Madrid."

The Germany international also underlined his desire to help Real Madrid enjoy a successful season following a 2012-13 campaign that resulted in no silverware.

"When you play for a team as important as Real Madrid, you have to win titles and we will do everything possible," he added.

"We will work hard. We are a club that has special players and I am convinced that we will win titles this year. We have our aims and each of us has a role and we will try to win all of the titles on offer.

"That's one of the big reasons for me being here".

Ozil has made 158 appearances for Real Madrid since his 2010 move from Werder Bremen, scoring 27 goals in that time.