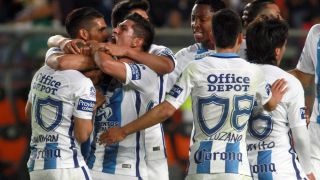 Pachuca reached the CONCACAF Champions League semi-finals after a 4-0 thrashing of Deportivo Saprissa in their last-eight second leg.

The tie was delicately poised after a 0-0 draw in Costa Rica, but Pachuca made the most of their home advantage on Tuesday.

Victor Guzman, Jonathan Urretaviscaya, Franco Jara and Hirving Lozano were on the scoresheet at the Estadio Hidalgo.

The result saw four-time winners Pachuca become the first team to advance to the semi-finals of this season's competition.

Poor marking led to the 29th-minute opener, Guzman left free at the back post to tuck away a Urretaviscaya free-kick.

Just two minutes later and the lead was doubled as that duo again played their parts, Urretaviscaya cutting inside from the right after a Guzman pass before finding the bottom corner with his finish.

Jara headed in a Urretaviscaya cross in the 69th minute before Lozano, once linked to Manchester United, completed the win with a tap-in after dispossessing goalkeeper Danny Carvajal.