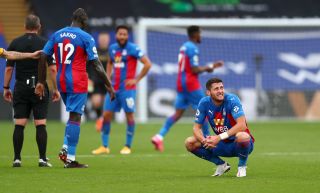 Roy Hodgson labelled the handball rule “nonsense” after he watched Crystal Palace lose 2-1 at home to Everton due to Richarlison’s 40th-minute penalty.

Joel Ward was punished after the ball hit his hand inside the area from Lucas Digne’s header, but only after the video assistant referee gave the power back to the referee at Selhurst Park.

Kevin Friend awarded the Toffees a spot-kick after he used the pitchside monitor and it proved decisive after Cheikhou Kouyate had cancelled out Dominic Calvert-Lewin’s opener for the visitors in the capital.

Even though Palace benefited from a similar decision last weekend away to Manchester United, the Eagles manager criticised the handball rule and highlighted another penalty given earlier in the day for the Red Devils at Brighton.

Hodgson insisted: “I criticised it last week if you remember correctly. I said that wasn’t a penalty.

“I didn’t think this one was a penalty and I don’t think the game I watched on TV before this one started – when Neal Maupay was adjudged to have handled the ball – was a penalty. I think it is a nonsense.

“Obviously discussions and dramatic moments are what keep your work in full swing, but for us in football I find it very disappointing that the game I love and believe in is being reduced to this level.

“Every week games are being decided on so-called penalty decisions for handball which are definitely not handball.”

According to the International Football Association Board, if the ball hits the hand of a player who has made their body “unnaturally bigger” then a foul will be awarded.

Ward, on his 250th appearance for Palace, was deemed to have done just that in the 37th minute and it left Hodgson perplexed.

“I just don’t understand how we have allowed it to happen,” the 73-year-old added.

“How the Premier League, the referees, coaches, managers and players have allowed this type of situation which we have virtually in every match to occur.

“The rules of football are important, one of the beauties of the rules is basically everybody knew them because we all played it in the school yard.

“I think whole thing is a nonsense and I am always disappointed a good game of football, between two good teams which should have finished as a draw, now means one goes away with three points and the other with zero.

“The winner leaves knowing full well it shouldn’t have been a penalty and the losers goes away knowing we have played well enough but this penalty has robbed us of taking any points from the game.”

🗣 | “The spirit was fantastic but we have to keep going to try to improve where we have to and be focused there. I’m really pleased what we have done in this first period of the season.”@MrAncelotti reflects on our 100% start to 2020/21. #CRYEVEpic.twitter.com/FoUmTGZjLl— Everton (@Everton) September 26, 2020

Everton boss Carlo Ancelotti saw his team make it five straight wins in all competitions this season, but was not completely satisfied with the display at Selhurst Park.

“The performance was difficult,” the Italian admitted, despite guiding the Toffees to the top of the table. “We had difficulties.

“The game in the first half was quite good and we were able to play how we wanted, the second half was more difficult because Crystal Palace played a good second half and put a lot of pressure on us.