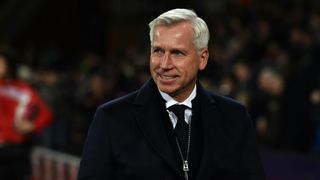 Crystal Palace chairman Steve Parish believes manager Alan Pardew should be linked with football's leading jobs, but he is delighted this is not the case.

Pardew's Palace side host reigning Premier League champions Chelsea on Sunday, knowing victory will move them back up to fifth place in the table.

Since moving from Newcastle United to Selhurst Park, where he plied his trade as a player, Pardew has enjoyed a superb 12 months in charge and Parish would not be surprised to field calls from heavyweight clubs if Palace's form continues.

"Alan is doing a fantastic job for us and he is very much a part of everything we are doing at the club," he told Sportsweek on BBC Radio 5 live.

"We're desperate to keep hold of him so we're happy they're not [being linked with him]."

Parish, who last week said he would not stand in Pardew's way if a bigger job came along, understands his manager will have ambitions beyond south-east London.

"Of course, I would think everybody want to get to the top of their profession," he said.

"I was just looking at his win percentage this year, 53 per cent – it's ridiculous.

"Any chairman will tell you, when you're looking at managers, anything over 34 per cent win percentage is outstanding in a top league."

Last month, American investors Josh Harris and David Blitzer secured an 18 per cent stake in Palace and Parish hopes an injection of funds can help him to transform the club off the field.

"We really need to redevelop the stadium," he added.

"We've fallen behind in infrastructure terms and we're playing catch-up as quickly as we can. The manager is doing well and that gives us a bit of breathing space.

"We've broadened the investor base just so it's less money for everybody to put in. Redeveloping stadia and academy training grounds are not inexpensive endeavours.

"They'll also bring expertise and knowledge. They've got big sporting interests in America so they can bring a lot of things."