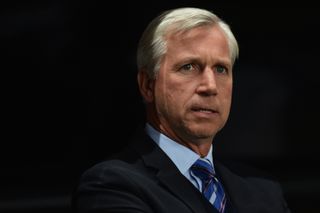 Newcastle fell behind to a Steven Fletcher header in the opening five minutes at the Stadium of Light, but recovered to level in the second half through Mathieu Debuchy’s first goal for the club.

Yohan Cabaye and substitute Shola Ameobi both went close with long-range efforts for the visitors but were unable to test Keiren Westwood in the Sunderland goal.

Newcastle were ultimately punished for wasting chances as Fabio Borini struck in the 84th minute to seal Sunderland's first win of the season, but Pardew felt his men deserved at least a point.

"It is a real tough one for us to take," he said. "The more the game went on the more control we got; we had two or three chances at 1-1 and if we get the goal the game is over because they would have been dead.

"Unfortunately for us we didn't get that second goal and unfortunately the referee's played a part in that defeat as well because it's definitely not a free-kick (in the build-up to Sunderland’s winner), in my opinion.

"The linesman's given us a throw, but the ref’s given a foul, and one or two of them switch off.

"They (Pardew’s players) certainly didn’t think it was a foul, and they (Sunderland) just slip through us and the one chance they’ve had in the second half he (Borini) smashes it in."

Newcastle have now suffered successive defeats to Sunderland for the first time since 1967.

"I feel disappointed for our fans and the team; they didn’t deserve that," Pardew added.

"I thought they deserved to win. They just switched off. A little bit of professionalism cost us.

"After the start I thought we settled down reasonably well.

"We changed our system a little bit. It started to pay dividends from 20 minutes in and right up until their second goal I was really pleased."