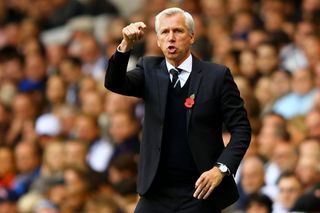 Pardew's side came from a goal down to record a second successive Premier League victory at White Hart Lane courtesy of Sammy Ameobi and Ayoze Perez.

Ameobi scored his first top-flight goal for the club just seven seconds after his introduction at the start of the second half, before Ayoze opened his Newcastle account.

A late replacement for the injured Papiss Cisse, close-season signing Ayoze marked his first league start with the winner but Pardew felt his side needed "shaking up" after a below-par first-half showing.

"There were a few strong words. As a manager, it's not nice to go in and bark out orders but sometimes it's necessary to shake people up and we needed shaking up," he revealed.

"We were giving too much possession to Tottenham, too much space. We never made a tackle and we were fortunate to come in at 1-0 [down].

"I reminded them of the fundamentals of a Premier League game and I thought [in the] second half the players were magnificent.

"We needed to offer a threat - we're Newcastle United, we're not a small club. We're a big club but we were playing like a small club.

"I was pleased they took on board what we talked about. Certainly in the second half our attitude went up a level and that was the difference."

Newcastle endured a woeful start to the campaign but are now out of the bottom three.

Pardew - whose position has been the subject of scrutiny - feels the victory over Tottenham will prove huge for the club in the wider context of the season.

"We find ourselves out of the relegation zone and that's a massive relief for this football club because the spotlight was very much on us," he added.

"The pressure affects everyone, not just the players, so in a way that's been a great victory for us.

"The back end of last year we struggled, the start of this season our players haven't quite settled and we've struggled again.

"I've not hidden from the criticism. We've still got a lot to do but today I'm going to smile and enjoy this victory because it's a big, big win."