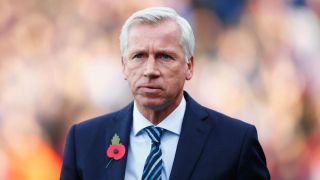 Crystal Palace manager Alan Pardew is expecting a response from the Premier League's big teams sooner rather than later in a season of unprecedented upsets.

Pardew will be hoping that response is delayed at least another week as Palace welcome title holders Chelsea to Selhurst Park on Sunday.

Chelsea have endured a horrific season by their usually high standard, sitting closer to the relegation zone than the Champions League places in the table, which resulted in the departure of club's most successful Jose Mourinho, but Pardew said there is no chance the Londoners will be relegated.

"For Chelsea, it is a freak year which I don't think is going to happen again," Pardew said.

"I think they are going to find it hard to get into the top six, but they will push."

Manchester United are another team who have struggled this season.

Under-fire manager Louis van Gaal and his team went eight matches without a win in all competitions prior to Saturday's 2-1 victory at home to Swansea City.

"It's a season that's thrown up a few surprises, but the top clubs will react," Pardew added.

"Don't think [United and Chelsea] are just going to say 'OK' and roll over. We will drive them to get better.

"At the moment the top clubs, apart from Arsenal, who have come through the process and are on an even keel, are searching on how to deal with the up-and-coming stars while running a Champions League campaign. It is proving very difficult for them."

The struggles of the big clubs have offered teams such as Pardew's Palace a unique opportunity.

"Suddenly the opportunity has come to get past them and, because we have been able to go out and buy better players, we can compete," Pardew said.

"It hasn't totally happened yet, but the opportunity is there. We have definitely upped our game."