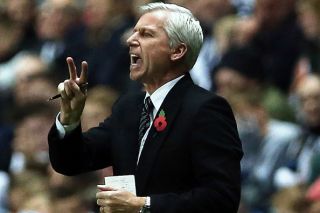 The Magpies took the fight to City throughout but were unable to find the back of the net.

Speaking after the match, Pardew said a brilliant save from Costel Pantilimon that denied Papiss Cisse a certain goal was a pivotal moment in the contest at St James' Park.

"If that goes in it could've been different," the Newcastle boss said.

"I think it was obvious the first goal would be crucial and they got it.

"David Silva had a big influence when he came on but before that I thought we were the better side.

"I'm disappointed for the fans and our players because they put on a terrific show after the disappointment of Sunday (losing to rivals Sunderland).

"It was just a shame we couldn't get the goal we deserved."

City striker Edin Dzeko, who set up the opener for Alvaro Negredo before scoring the second himself, said the match was a good chance for fringe players to prove themselves.

"Tonight was a chance for those of us who maybe haven't played in the last few games to show the manager we deserve to play," Dzeko said.

"We have to show it on the pitch and I think we did that tonight."

"He was great," Dzeko said.

"He's working hard in training and that is now the second game in the cup where he hasn't conceded a goal, so he's improving."

City will travel to Leicester City in the quarter-finals after their extra-time victory.