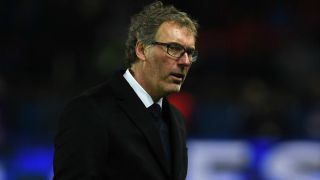 Paris Saint-Germain will be looking to secure their second domestic trophy of the season when they face Lille in the final of the Coupe de la Ligue on Saturday.

Laurent Blanc's men may have crashed out of the Champions League earlier than fans would have liked, but their performances in France have left nothing to be desired, with champions having wrapped up the title in record time and boasting a 28-point cushion on second-placed Monaco.

However, Blanc's future at Parc des Princes remains somewhat in doubt, with their achievements in Europe continuing to undermine the domestic success.

The former France defender admitted after exiting the Champions League at the hand of Manchester City that he has always felt under pressure ever since taking over from Carlo Ancelotti in July 2013, and talk of a move to appoint Jose Mourinho has resurfaced.

Yet for now, PSG's primary focus is on making more history under their coach as they aim to defend the domestic treble won last season - and midfielder Benjamin Stambouli is eager to give the fans another reason to celebrate.

"Playing in a final is nothing to sneeze at, so we'll do all we can to try and win it," he told the club's official website. "These matches go down in club history and are very important for the fans.

"We'll give everything to win it. We know it won't be a simple match, and we're preparing with that in mind. Lille are a very good team who defend well and have a lot of talent going forward - as well as being on a very positive dynamic at the moment. We'll need to be wary."

Lille have hit momentum at the right time under Frederic Antonetti, winning six Ligue 1 games in a row, though they have never before reached the final of the Coupe de la Ligue.

Club captain Rio Mavuba believes his side are benefitting from a more ruthless attacking approach as they aim to shock the holders at the Stade de France.

"We are also much more efficient than before. We come to score our first opportunities. And that's something we should keep going, because it inevitably makes the difference," he said.

"We're pumped, but we're wary of overconfidence. It will be a difficult match against the team that won everything in France last year. Over the course of a championship, the Parisians are unplayable. But in one game, we will have our chances."

Marco Verratti could make his return to the PSG squad after battling to recover from a groin problem, while Thiago Motta is expected to return after sitting out the last two games with a thigh injury. Veteran Marko Basa should be available after missing Lille's last match against Ajaccio.

Lille saw off Troyes in the round of 32 at home before beating second-division side Laval in the next round to set up an away tie at Guingamp, whom they beat on penalties. They then thrashed Bordeaux 5-1 to reach the final.

PSG, meanwhile, saw off Saint-Etienne, Lyon and Toulouse at Parc des Princes, conceding just one goal in the process. They will be looking for their sixth title, which would give them twice as many as any other side.