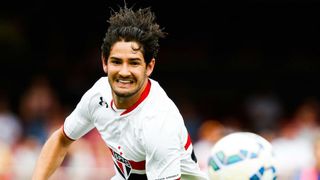 The 26-year-old is expected to complete his temporary move from Corinthians over the coming days after his previous loan spell at Sao Paulo ended in December - declaring Chelsea his "new home" after arriving in London on Wednesday.

Having been snapped up as an exciting prospect by AC Milan in 2007, Pato enjoyed a number of promising seasons at San Siro before injuries slowed his rise and ultimately led him to return home.

The Brazil international will have the rest of the season to showcase his quality and Hiddink does not believe the signing is a gamble, despite Pato having not played first-team football since early December.

"He is in London, well-spotted. Nowadays there are no secrets because everywhere there are cameras," Hiddink told reporters.

"He is in the process of completing the bureaucratic paperwork. We don't rush it, we'll see how soon it can be solved and when he can get on the pitch.

"He was a promising youngster and it was nice to see such a stylish player, then he had a few years in Milan and after that he did not go to make a big step in Europe.

"He went back to Brazil so now he has another chance to make a step in Europe and in England, which is a brave step.

"It's up to him but we'll help him get fit and see what he can bring to this club.  It's not a gamble, coming on loan makes it possible to have a good view on him, whether he is able to adapt to our demands.

"We give him support but it's up to him. If you buy those players who must make the next step then it's more of a risk but a loan is a good move for everyone to see whether he's happy at the club and whether the club is happy with him."

Hiddink hinted Loic Remy could leave the club despite the forward suffering from a minor calf injury, which would leave Pato to compete with in-form Diego Costa for a striking berth.

Costa boasts six goals in his last six games and Hiddink reserved praise for the Spain international who, like Chelsea, endured a difficult start to the campaign.

"I don't know what he did in previous games but I'm pleased with what he is doing now. I am pleased with the efficiency of his goals.

"We are depending on him - a little too much sometimes - but I'm very happy with his performance and his attitude.

"He's a key figure for us, he's very nice to everyone outside the pitch and in Cobham, focusing on his job. He's of huge importance for us. I respect his attitude as well."