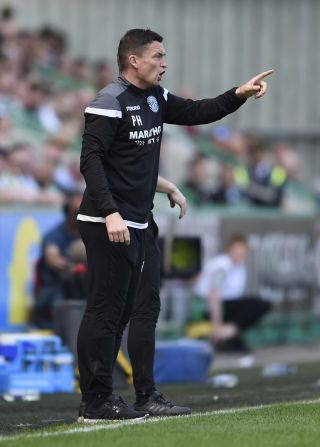 Hibernian head coach Paul Heckingbottom is not expecting to be hauled before disciplinary bosses after insisting he was only jesting when he said he felt like knocking out fourth official Gavin Duncan’s teeth.

The Yorkshireman hit out after last week’s Edinburgh derby draw with Hearts, claiming the official had sworn at him during a touchline row.

The former Leeds and Barnsley boss had to be held back by goalkeeping coach Alan Combe after rushing towards Duncan when referee Craig Thomson failed to award his side a first-half free-kick.

He was quizzed after the match on why he had been so animated, telling BBC Radio Scotland: “It didn’t help getting sworn at by the fourth official, I’d have knocked his teeth out if it was anywhere else. So that was one of the reasons.”

But Heckingbottom tried to walk those comments back as he faced the media again ahead of Sunday’s Ibrox showdown with Rangers, claiming his words were not serious.

Asked if he regretted the comments, he replied: “No. Afterwards when we saw all the headlines I was thinking in black and white it looks… (puffs his cheeks out).

“It was half said in jest and in answer to a question. I could have picked any number of things why I was animated on the sidelines.

“One was that my back was killing me, one was yeah, he swore at me, another was what I was seeing on the pitch which I wasn’t happy with. I chose that one, that was it.

“No (I don’t expect to be cited) at all. The SFA always comes and sees you after the game and asks if you have any issue. There was no issue from me at all, do you know what I mean?

“The job is tough enough without me moaning about the (officials) and criticising them. I don’t see how you can take it any (further), if I’m honest.

“If you read the headlines, it doesn’t look great, does it? But if you see the interview and the context it is totally different.

“If you’re asking what was meant by it, I was just using something to answer a totally separate question. I wasn’t probed on anything regarding the referee, it was me who brought it up. I could have said anything but I said that.

“There was nothing personal against the guy at all.”

While Heckingbottom is hoping to escape punishment, his side could come up against a striker who has had more than his fair share of run-ins with the SFA’s disciplinary chiefs this season.

Rangers’ top-scorer Alfredo Morelos is available again having served a four-game ban after being sent off for an elbow on Celtic skipper Scott Brown.

His Old Firm dismissal was the fifth time he has seen red this season and Heckingbottom would not be surprised to see the Colombian left out given the way Jermain Defoe has stepped up in Morelos’ absence.

He said: “They have not missed Morelos, that is a fact. He will be hungry to get back on the pitch and to win back the faith of the players and staff there.

“The team has been fantastic while Alfredo has been out. They’ve been on fire scoring goals for fun. Either way, it will not change our set up who they start with.

“Do I expect Morelos to start? I’d be guessing but probably not just because the way Jermain has been playing.”