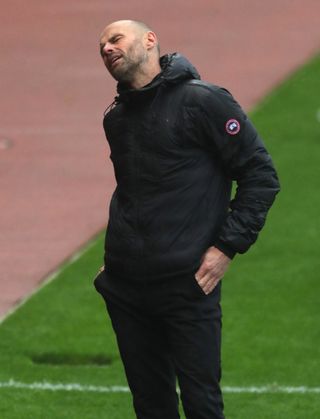 Rotherham manager Paul Warne was left heartbroken as his side again dropped points late on with a 1-1 draw against Huddersfield.

Ben Wiles’s first half screamer had looked as though it was going to earn Rotherham a second win upon their return to the Championship.

But The Millers sat back in injury time and were punished when Pipa’s shot deflected in off Angus MacDonald to ensure the Yorkshire derby finished all square.

The Spain Under-21 international had come closest to levelling the match earlier on in the second half but was denied by Jamal Blackman as the visitors huffed and puffed to get something.

Rotherham manager Warne called the late blow a “weekend spoiler” for his side and it comes a week after they conceded a late penalty at Birmingham.

He said: “I think out of possession the lads couldn’t work any harder. Huddersfield don’t give you a minute on the ball and they forced us into a lot of unusual errors.

“I was really pleased with the lads for giving everything. Especially considering Angus was outstanding, it was harsh on him.

“There are only so many waves that you can stop really. It’s doubly cruel to concede an own goal. I would rather someone bend one in from 30 yards.

“Unfortunately it’s four points we’ve dropped in two games and we would be absolutely smoking it with them.

“If teams are losing they are going to throw everything at you. Did Huddersfield do enough in the game to get a point? I think they did. They were in the ascendancy for a lot of the game. For it to be so late, is just heartbreaking really.

“You always need a second goal. The good thing is when we show them what went wrong, they will see the importance of everything they do in the last ten minutes.

“It will have a psychological blow on them and it will be a weekend spoiler for them. The lads are doing a lot of things right.”

Huddersfield head coach Carlos Corberan is pleased with the way his side are adapting to his methods after taking over in the summer.

He said: “Rotherham was going to be one of the toughest games we were going to play. I think it’s important to find a way you can dominate a game. You can do that with the ball.

“In the first half we couldn’t create all the chances we wanted. In the second half we created more clear chances.

“I was very proud of all my players even if we didn’t score the goal. In football the most important thing to do is score. It took a bit of luck but it was very clear that we deserved it today.

“I am happy when I see the level of the team. I am more happy about the performances than the results we are getting.”