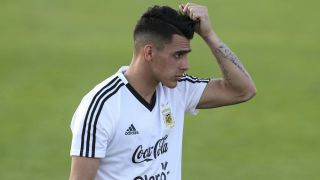 In a tournament as ubiquitous in coverage as the World Cup, it's hard for any team to come up with a secret weapon.

As Croatia star Ivan Rakitic said to a packed news conference in Nizhny Novgorod, where Croatia will face Argentina on Thursday: "With the analysis of today, if you didn't know a player, you could learn everything about him in 30 minutes."

Argentina, however, might just have an ace up their sleeve. And it seems the time to deploy it is now.

Cristian Pavon is a relatively unknown name to audiences outside of South America, albeit one linked with Barcelona and Arsenal, among others. The Boca Juniors winger has spent his career to date in Argentina's top flight and only made his debut for the senior national team last November, in a 1-0 win over World Cup hosts Russia.

He may not have yet made his mark on the global scene, but his rise to prominence in the eyes of Argentinians has been swift. Boca reportedly paid €1.3million to sign him from Talleres de Cordoba as an 18-year-old in 2014, just four days before he would watch his national team lose the World Cup final. He has only spent two seasons in Boca's first-team set-up but has already become an indispensable part of the line-up. In that friendly against Russia, he was on the pitch for 12 minutes but still set up the only goal of the game.

Now, he looks set to start in their most important match in months.

11 – Lionel Messi attempted 11 shots for Argentina vs Iceland (the most he’s ever attempted in a World Cup game), but he still didn’t manage to score a goal. Frustration.June 16, 2018

"Cristian is a player with enormous potential, he can really turn a match around for us," head coach Jorge Sampaoli said on Wednesday.

"Cristian is a player who is extremely highly respected in the squad. Obviously, he hasn't played many matches for Argentina so we can't burden him with a complete responsibility but we definitely have in him a special card we can play if the situation becomes complicated."

Argentina must get a good result against Croatia, both to banish thoughts of the draw with Iceland and give themselves the best chance of going through to the last 16 as Group D winners. The situation is already complicated, whether Sampaoli admits it or not.

Pavon is a vibrant attacking player, capable of scoring goals (he has 15 for Boca in the league in the last two seasons) and creating them. He is also a major unbalancing act for opposition defences: the pace and skill in possession he showed in the build-up to Lionel Messi's third goal in a recent friendly with Haiti proved as much.

It's really for Messi's benefit that Pavon is in line to face Croatia. Sampaoli spoke at length of the need for other players to exploit spaces when opposition defenders crowd around the Barcelona star. Pavon is the best fit to do just that.

Reports in Argentina suggest Sampaoli will favour a 3-4-3 system against Zlatko Dalic's side, too, giving Eduardo Salvio and Nicolas Tagliafico more freedom as wing-backs, with Messi and Pavon out wide in support of Sergio Aguero. With overlapping runners and Pavon on hand to stretch the defence, the theory is that Messi will have the space to thrive that Iceland so ruthlessly denied him.

So much of the talk around Argentina centres on whether Messi can deliver, whether he can emulate Diego Maradona's achievement in 1986, lead his side to glory and become history's undisputed greatest. His hopes of doing so will depend greatly on the performance against Croatia and, in turn, the performance of Pavon.

The time is right for Sampaoli to unleash his youngest star. Argentina's brightest depends on it.