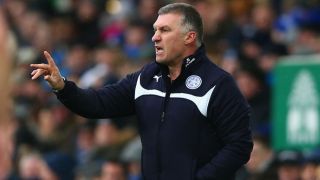 The Premier League's bottom club appeared on course for a victory that would have moved them within two points of safety, with David Nugent and Esteban Cambiasso capitalising on errors from Everton goalkeeper Tim Howard to turn the game on its head following Steven Naismith's 57th-minute opener for the hosts.

But there was a final twist in the tale at Goodison Park as Matthew Upson deflected Romelu Lukaku's header from Christian Atsu's cross in at the near-post with a minute of normal time remaining.

Pearson admitted the draw felt like a defeat, but wants his players to focus on replicating the same kind of performance rather than on the late disappointment.

"It feels a bit like a defeat at moment because their equaliser came so late but we forced the issue right to the end," Pearson told Sky Sports.

"We frustrated Everton and their fans to a certain extent as we played with a lot of discipline and we looked dangerous.

"What's needed is more wins and we will get them if we perform to that standard. We have put in some good performances that have not yielded the points.

"The fashion of the result is the hardest thing. What we have to do is look forward, we can't dwell on this. We have very capable players and we have to start turning the performances into results."

Pearson is the bookmakers' favourite to be the next manager removed from his post and was reported to have been sacked two weeks ago before Leicester issued a denial.

But Pearson insists he is not affected by the continued speculation.

"I can't do too much about what is being speculated," Pearson added. "I always do my job as conscientiously as I can and I will continue to do that until I am told otherwise. I'm committed to job and that's all you need to know.

"All managers work in situations where things can change quickly. I have always been very supportive of our owners, and they have of me, and they will make decisions that are right for this football club."