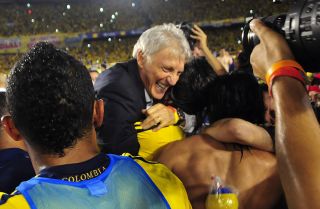 Colombia trailed 3-0 at the break in their qualifier after Alexis Sanchez scored twice, and Arturo Vidal netted from the penalty spot in the first half.

Pekerman's side staged a stunning comeback in the final 25 minutes though, with Teofilo Gutierrez's 69th-minute effort stirring them.

A delighted Pekerman said: "We knew beforehand this would be one of the best games of the qualifying round because of the two teams and how they've been playing. And we saw that, we saw it was exactly that.

"We also knew that both teams were capable of doing damage. Today we had two halves - one was absolutely Chile's. And the other was undoubtedly Colombia's.

"We know we've had good games and had bad games. We have had some surprises. We have defects and good qualities. It's very important that the team has always has felt and acted in this manner."

Pekerman also praised the spirit within his squad - highlighting their ability to mix talent with hard work.

"No one thinks they are they are best. You have to be prudent and we always have been," he continued.

"Of course the people suffer because they saw with shock the first half, I understand that, but football is like this.

"I'll repeat: I am proud of this team and what the team did. It's very difficult in football to have these two things: to have players with talent, good players, and to have this rebellious attitude and to get such a result, facing it head on. It's marvellous."

Colombia face Paraguay on Wednesday in their final qualifier knowing that, even with a defeat, the lowest they could drop is to third.