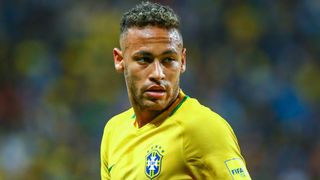 Pele believes Neymar made the right decision to step out of Lionel Messi's shadow at Barcelona and join Paris Saint-Germain.

Neymar swapped Barcelona for PSG in August after the Ligue 1 giants activated the Brazil star's €222million buyout clause to make him the most expensive footballer in history.

The 25-year-old has hit the ground running in Paris, scoring three goals and tallying as many assists, having helped Barca to LaLiga and Champions League glory during his time at Camp Nou.

And countryman Pele – widely regarded as the greatest player of all time – endorsed Neymar's transfer to PSG.

"At the moment the best player in Brazil is Neymar and I think the move for him was very good because there was huge competition with Messi at Barcelona," Pele told Marca.

"I think it's a good opportunity for him and he needed to move because now he can really play and show what he's capable of. But it's also very dangerous when you get given that responsibility."

Asked whether Neymar can join Rivaldo, Ronaldo, Ronaldinho and Kaka as the only Brazilians to win the Ballon d'Or, Pele replied: "Of course he can.

"Neymar has a football at his feet which is all he needs. [Philippe] Coutinho is a player I think we should all look at too because he is excellent for his team. No doubts at the moment though that Neymar is the one."

Neymar is on international duty with Brazil, who are already assured of their place at the World Cup in Russia next year.