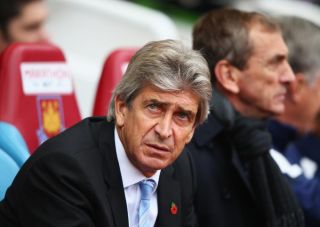 After nine league matches, Pellegrini's men have already slipped six points behind Chelsea - having lost to West Ham and Stoke, while being held to draws with Arsenal and the league leaders.

The Chilean tactician put their supposed struggles into perspective, claiming City had one more point this season than last after nine fixtures - ahead of their Capital One Cup hosting of Newcastle on Wednesday.

"Last year, we had one point less than this year in the table. We didn't start as well as I wanted last year but we still won the league," Pellegrini said.

"Surely, with 87 points still to play for, nobody can think it is finished?

"Yes, this year, maybe, we are playing in irregular form.

"But I am sure we will return to be the same team we were in the most important part of last season."

City conceded less than a goal a game as they won the title for the second time in three seasons, while they have shipped 10 goals so far this term - keeping clean sheets against Newcastle and Aston Villa.

But Pellegrini hailed his defence, and claimed the likes of Eliaquim Mangala, Vincent Kompany, Martin Demichelis, Matija Nastasic and Dedryck Boyata will lead the back line throughout the season.

Mangala cost City £32 million from Primeira Liga heavyweight Porto but has so far struggled to find his feet in England.

"Mangala is a young player but he has a lot of experience. And I am sure we bought the centre-back that we need in him," Pellegrini said.

"With him, Kompany, Demichelis, Nastasic and Boyata, we have centre-backs that, I can assure you, will play very well.

"The same thing happened with Demichelis last year - remember the criticism for him after he just arrived in the Premier League?

"And we will be trying not to concede [against Newcastle], as I think it's very important to have clean sheets."