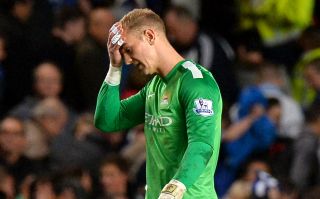 Hart's status as the club's first-choice goalkeeper will again be placed under the spotlight this week, after he gifted Fernando Torres a last-gasp winner at Stamford Bridge on Sunday.

The England shot-stopper's latest gaffe of an error-strewn season came following a mix-up with centre-back Matija Nastasic in the 2-1 defeat, as he came to collect a header from his team-mate and missed, allowing Torres to slot home.

It added another unwanted black mark following a catalogue of errors after Hart was at fault for goals in City's losses against Cardiff City, Aston Villa and Bayern Munich, while he has also slipped up for the national team.

And although Pellegrini was reluctant to discuss culpability for Chelsea's winner after the match, he declined to publicly back Hart when offered the opportunity.

"You must ask him how his confidence is," said Pellegrini, who had previously admitted it was hard not to drop Hart after his performance against Bayern Munich in the UEFA Champions League.

"We will talk during the week. We lost the game and we will talk, for me, just internally with the players.

"From tomorrow we are going to see which is the best way to arrange the thing that's repeated in the three matches that we have lost playing away."

City have won just one of their five Premier League away trips this season - against West Ham - with all three of their defeats coming on their travels.

A disappointed Pellegrini felt his side were far better than Chelsea and that his side have been badly undermined by errors at the back this season.

"We are losing stupid points," he added.

"I think that of the three defeats that we've had away, we deserved not one of them. But the reality is that we have (lost).

"We have time to arrange and we will try to arrange. For the most part I am very happy with how the team is playing everywhere – at home or away I think we have a way to play football.

"In a very difficult stadium playing away against a great team (Chelsea) we had control and we did a very good game."