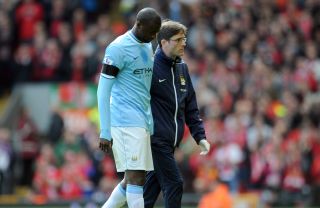 The influential midfielder limped out of the 3-2 defeat Liverpool 12 days ago with a thigh injury and has not featured since, missing games against Sunderland and West Brom.

City are six points behind leaders Liverpool with a game in hand, so Toure's return would be a huge boost ahead of their run-in, which begins with a tricky looking fixture at Selhurst Park against a Palace side on a five-match winning run.

Pellegrini hinted that Toure could be available as he omitted the Ivorian in a list of injured players in Friday's press conference, before hailing the importance of Sergio Aguero, who recently returned from an injury of his own.

"We have (David) Silva, Jesus Navas and (Matija) Nastasic out with injury - all of the other players are fit," he said.

"David is working, improving. With Navas' ankle, it's the same. These three players are injured - we don't know how much longer for David.

"It's good to have Kun (Aguero) back. He's a top player and makes an important difference. We played a lot of games without him but always he's very important for the team."

City will have one eye on events at Anfield before their game on Sunday, with title rivals Liverpool and Chelsea going head-to-head in a an eagerly-awaited encounter.

With Chelsea taking on Atletico Madrid in the second leg of their UEFA Champions League semi-final next Wednesday, Jose Mourinho has hinted he may field a weakened side, but Pellegrini knows that is out of his hands.

"I don't know what Chelsea are going to do," he said. "The only important thing and the only thing we can do is to win our game and that is what we're going to do from now until the end of the season.

"I think that every team tries to do the best thing for their teams. We must win our games."