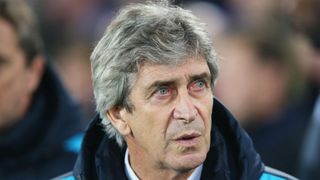 Manuel Pellegrini blasted the performance of the officials after Manchester City lost 2-1 to Everton in the League Cup semi-final first leg.

City will head into the second leg with work to do after Romelu Lukaku's 78th-minute header settled Wednesday's entertaining encounter at Goodison Park.

Jesus Navas had cancelled out Ramiro Funes Mori's first-half opener two minutes earlier but City could not level for a second time despite Everton playing the closing stages with 10 men due to an injury to Seamus Coleman, leaving Pellegrini to fume at a pair of key decisions.

The Chilean felt Lukaku - who was standing in an offside position when Ross Barkley fired a shot that Willy Caballero parried into the path of Funes Mori for the opener - should have been flagged by the linesman.

And he was disappointed not to see a penalty awarded to City by referee Robert Madley in the second half when Kevin Mirallas looked to haul down Navas in the area.

He told Sky Sports: "He's [Lukaku] absolutely offside. It's unbelievable the referee or the linesman didn't give that offside.

"It's [the Mirallas challenge] a foul inside the box, he doesn't touch the ball, it's a clear penalty.

"We didn't deserve to lose. In the second half we have a clear penalty and two chances more to score. It was very important not to concede another goal."