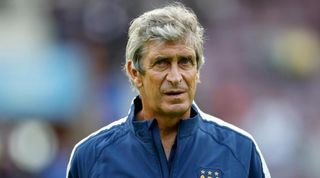 Ivory Coast midfielder Toure was subjected to abuse from supporters of the Russian club during City's 2-1 UEFA Champions League victory at the Arena Khimki last year.

UEFA reacted by launching an investigation, which resulted in the governing body ordering CSKA to close part of their stadium for a subsequent clash with Bayern Munich.

Premier League champions City have been drawn in the same group as CSKA again in this season's Champions League and Pellegrini hopes lessons have been learned from the last meeting between the two sides in Moscow.

"I hope they have learned about that," said the City manager. "I don't think we will have any problems this year.

"There was also a problem with the pitch. But hopefully it is a lesson they will have learned."

Pellegrini knows his side could have had a more favourable draw, but the former Malaga coach is ready for the challenges that lie ahead.

"I think it's a similar group to last year, a difficult group. With Roma also in a group, it's difficult but we must play and try to qualify." said the Chilean.

"Maybe other draws aren't as difficult as ours but that doesn't matter."

When asked if it was fair that Liverpool, Chelsea and Arsenal would appear to have easier groups, Pellegrini said: "It's the rules of the draw, maybe there are different systems but now there is one system and there's nothing we can do to change that.

"I don't know if there is a better system than they [UEFA] use now."

Pellegrini also played down concerns over Sergio Aguero's fitness after he went down under a challenge from Aleksandar Kolarov in training on Thursday, revealing that the striker is fit to face Stoke City on Saturday.

Alvaro Negredo is the only member of Pellegrini's squad absent through injury, although recent arrival Eliaquim Mangala is not yet ready to feature.