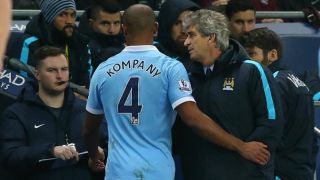 The 29-year-old Belgium international was only nine minutes into his return from a calf injury suffered in September against Sunderland on Boxing Day when he was forced to withdraw himself from the contest after suffering a similar injury.

But while Pellegrini and Kompany's team-mates have appeared relatively calm about his struggles with injury, the defender himself is uneasy about the situation as he looks unlikely to return before the latter stages of the season.

"He's the first one who is very worried about his situation," said Pellegrini.

"That is why he is going everywhere to ask different specialists what is the reason.

"I think that is the professional way to work when you have problems that don't allow you to play in your normal way.

"I think you must find every way to see if you can find a solution.

"Maybe there's not a solution or maybe this can be his last injury but I think he has a very good attitude and he is doing everything he can to return as soon as he can."

Kompany has started just eight of City's 21 Premier League games this season, not including his nine-minute stint against Sunderland.