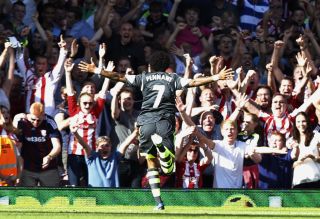 West Brom make the short trip north on Saturday high on confidence after stunning Manchester United 2-1 at Old Trafford and drawing 1-1 with Arsenal in their previous two outings.

In contrast, Stoke have lost their last two Premier League games 1-0 against Norwich City and Fulham, although the Staffordshire side do boast an excellent record in this fixture, winning nine and losing just one of the last 13 encounters.

Pennant thinks Steve Clarke's men deserve all the plaudits they have received over the past few weeks, but is determined to end their recent good form.

"They've had some great results and so they are going to come here on a high," the Stoke winger told The Sentinel.

"But I'm hoping the international break has put a little block on their momentum and that we can make our own momentum.

"Come Saturday, hopefully we will be fresh and wanting to get started again.

"As soon as we get a goal, no matter how it goes in, if it's 1-0 to Stoke at the Brit it will lift the whole city and we can get going again."

Pennant has been handed a second chance at Stoke by manager Mark Hughes after falling out of favour with his predecessor Tony Pulis, who left the club by mutual consent at the end of the last season.

Stoke have picked up seven points from their opening seven Premier League games under Hughes, and Pennant reflected: "We made a great start after the first few games.

"We have had a couple of dips in the last couple of games, which is unfortunate, and maybe there has been bit of nervousness."