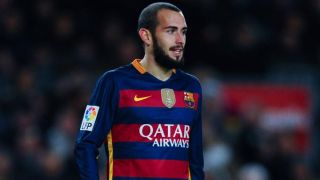 Aleix Vidal says people are now starting to recognise him in the streets after making his debut for Barcelona on Wednesday.

The midfielder made a second-half cameo as Barcelona recorded a 4-1 win over Espanyol in their Copa del Rey round of 16 first leg.

Luis Enrique then handed Vidal his first start for the club in their 4-0 win against Granada in La Liga three days later.

Vidal, an €18million signing from Sevilla in the off-season, has noticed an increase in attention on the streets of the Catalonia capital.

"Up until now, I could pass through Barcelona and my friends would tell me how no-one would say anything to be," he told TV3.

"The day before I played for Espanyol I noted how people were now recognising me."

The 26-year-old is relishing playing for the "best team in the world" but revealed he had his doubts when he heard of interested from the club.

"I had doubts when I heard Barca were after me, because it has been four of five years of me playing 40 games a season," he said.

"With Barca banned by FIFA [in registering players], I couldn't play for months.

"I'm not lying, but it was a difficult decision. My wife is the one that convinced me. She and a meeting with the coach showed they had a lot of confidence in me."