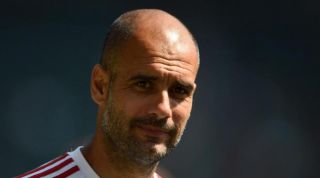 Runaway Bundesliga leaders Bayern have only lost twice in all competitions this season as they fight for trophies on three fronts, but Guardiola is taking nothing for granted.

The next step in the cup defence sees Braunschweig travel to the Allianz Arena on Wednesday, with a place in the last eight at stake.

"The cup is always dangerous, anything can happen," said the Spaniard. "[It] is a knockout game.

"We are focused and want to progress to the quarter-finals.

"Anything is possible and we have to have respect [for Braunschweig], but I'm optimistic."

Bayern are looking to claim a record third successive DFB-Pokal title this season and the second of Guardiola's reign after beating Borussia Dortmund 2-0 in the 2013-14 final.