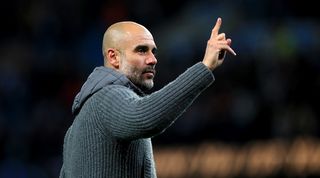 Pep Guardiola has assured Manchester City that he is not going anywhere for at least two years, according to The Daily Express.

The Catalan spent four seasons at Barcelona and three campaigns at Bayern Munich, and some City fans feared that he could choose to walk away before 2019/20, his fourth season at the Etihad Stadium.

However, Guardiola has told close friends that he intends to honour his contract by staying put until at least 2021.

That will come as a major relief to the City hierarchy after reports earlier this season suggested he could be in line to replace Max Allegri at Juventus.

Victory over Brighton on Sunday would make City the first team to retain the Premier League title since Manchester United in 2009.

The Champions League has proved elusive since Abu Dhabi's takeover in 2008, though, and Guardiola is determined to lift the trophy for a third time before he departs Manchester.