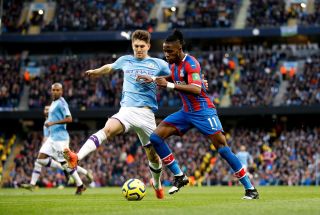 The England centre-back endured a difficult game as the champions were held to a 2-2 draw by Crystal Palace in the Premier League on Saturday.

The spotlight has been on Stones this season following the departure of Vincent Kompany and the long-term injury suffered by Aymeric Laporte, and his fortunes have been mixed.

Guardiola said of the criticism: “It’s unfair, yes. We are there (for him), I am there. There are ups and downs in your career so you have to be strong. We know his quality.”

Stones, whose role in both of Palace’s goals was questioned, is a doubt for Tuesday’s trip to Sheffield United with a leg injury.

“I have to speak with the doctors,” said Guardiola when asked about his availability. He added that Benjamin Mendy could also miss out due to muscular fatigue.

The Palace result enabled runaway leaders Liverpool to extend their advantage at the top to 16 points.

It has been a hugely disappointing title defence from City, who have long since conceded defeat to the Merseysiders.

City’s shortcomings have taxed Guardiola throughout the campaign and he is not resting as he attempts to put things right.

The former Barcelona boss said: “Every day I live almost 24 hours thinking about what we are doing and what we can do better.

“The games are good, we concede few, but the opponents score goals from few chances. That’s difficult to solve but we need to improve in this area.

“We’ve scored more goals than Liverpool, so our way is good, and we concede few. I don’t have the statistics but I don’t think there are many teams that concede fewer chances.

“But even with that we concede goals that punish us and see us drop points. When that happens it’s difficult to fight against Liverpool, or in knockout competitions, and we have to improve in this area.”

The targets for City are now the Champions League and the domestic cups, while aiming to secure second place in the Premier League would also ensure form is maintained.

Guardiola said: “(The aim is) to finish second, to improve every day for the knockout games in the other three competitions we play.

“There always has to be something inside all of us to move forward and improve. You cannot play good games in the knockout competitions if you are not running well in the Premier League.

“It’s not one day you are good then bad. You have to maintain the standards as high as possible.”

Guardiola also feels he could learn something from the Blades, who are seventh in the table and have impressed this term.

He said: “I’m incredibly impressed. When people say if you can improve watching other games and other teams and other managers, then this is the one.

“I have never seen some of the movements that they are doing. There’s a reason why they are in the position they are.”