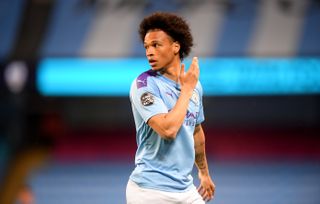 City are close to completing a deal with the German champions that could be worth a potential £54.8million.

Guardiola said: “It looks like he is going to go to Munich. I wish him all the best. I give him a big thanks for our years together.

“I would have liked him to stay here but he has decided to move on.”

After losing out on the Premier League title to Liverpool this season, City have the chance to prove a point as they host the Reds at the Etihad Stadium on Thursday.

Guardiola says, however, that his team always want to prove a point.

Speaking at a virtual press conference to preview the game, Guardiola said: “In sport, you have to prove every time.

“We are incredibly satisfied with what we have done and are doing but for athletes it is never enough. The past is the past, we have entered it in our memories but the show must go on.”

Guardiola has a healthy respect for his Liverpool counterpart Jurgen Klopp, with the pair’s rivalry being an amicable one.

Guardiola said: “I don’t know him that well but I admire him and the way that his teams play football. It is a benefit for the world, a positive to try to score a goal, and this kind of manager helps a lot.

“He wants to win, I want to win, but when it is finished the game is over. He’s my colleague and of course I want to have a good relationship with managers.”

City are still to learn where the second leg of their Champions League last-16 tie against Real Madrid will be played. The match was due to be played in Manchester but there have been suggestions it could be moved to Portugal when the competition resumes in August.

Guardiola said: “We are going to play wherever UEFA decide to play. Hopefully Manchester, but we don’t know.”