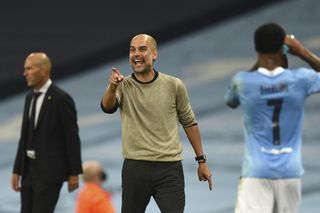 Pep Guardiola has called on his Manchester City players to embrace a special moment in their careers as they chase Champions League glory in Portugal.

City face Lyon in the quarter-finals of the reformatted competition at Sporting Lisbon’s Jose Alvalade Stadium on Saturday.

The mini-tournament for the last eight with all ties played over one leg – arranged due to the coronavirus pandemic – is more akin to an international event than the competition clubs are used to.

With all sides needing to adhere to strict medical protocols, the situation is a unique one and Guardiola wants to make the most of it.

Speaking at a press conference, the former Barcelona boss said: “I think this is an important moment for our careers, for our lives as professionals.

“So this is one in a lifetime and I think being together is exceptional. I prefer – people know it – to be at home, I don’t like to be in hotels. But this is a special (situation).

“The base is quite comfortable and the weather is fantastic. That’s why it is nice to be here and our dream is to do a good game and stay a few more days in this lovely country.”

Guardiola hopes the new format could play to his side’s strengths. City have come unstuck over two legs against Monaco, Liverpool and Tottenham during Guardiola’s time at the club, whereas they have excelled in one-legged domestic knockout games.

City have won the Carabao Cup for the last three years under Guardiola, as well as the FA Cup in 2018-19.

He said: “It’s different because when you play normally you play the first game with one eye on the second leg.

“But in England, when you play in the FA Cup or the Carabao Cup it is just one game. Every game is a final.

“Our players are used to these games. There is no second chance. You are in or you’re out.

“That’s what it is and it means our approach will be completely different.”

City will be without leading scorer Sergio Aguero, who has not featured since undergoing knee surgery in June. The Argentinian has not been ruled out of the remainder of the competition should City progress, but this game comes too soon.

Guardiola said: “He is still in Barcelona. I think he should come here and have to do a test but it is only a few days.”

City reached the last eight by completing victory over 13-times winners Real Madrid last week. They then travelled to Lisbon on Monday and Guardiola is in no doubt they are in great shape.

He said: “Anything can happen but we are ready and will do our best performance to go through.

“I don’t expect that it will be one side for 90 minutes. There will be moments when we have to suffer.

“We have to be strong in our minds and try to do our plan. These games are about the mentality and the spirit and I think the players are ready to do it.”

City faced Lyon twice in last season’s group stage, losing at home and coming from behind twice to draw away.

Guardiola said: “Here is a tough team with a lot of good players. We have to be focused on ourselves, be prepared and fight until the end to try to win.”