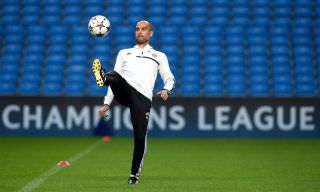 Ahead of Bayern Munich's meeting with City at the Etihad on Wednesday, Guardiola heaped praise on the English club, comparing them to last season's surprise packets Borussia Dortmund.

While City have failed to progress to the knockout phase in each of the last two seasons, the Bayern manager says they are a much improved outfit under new boss Manuel Pellegrini.

"(Manchester) City are one of the biggest clubs in Europe. You have to remember they didn't get through the group stages in the last two seasons but I'm 100 per cent confident they will get through to the next round," Guardiola said on Tuesday.

"I think Manchester City in the last years they did big steps forward.

"It's the same with what happened in Borussia Dortmund last season. Last season was the first time they qualified for the next round, and arrived to the final.

While Guardiola has never lost to a team managed by Manuel Pellegrini, he rates the City boss highly and admitted he 'would like to be like him'.

"No matter which club he is training, each team plays his way. His fingers, his footsteps, his trademark in his team is always there," Guardiola said.

"For me it's always a pleasure to play against Manuel because he loves to play football, he tries to keep the ball and his teams always play good."

Both sides kicked off the group stage with impressive wins and will take a huge step to advancing to the knockout stage with a win here.