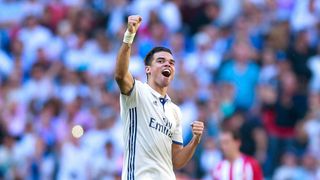 Pepe will wait as long as possible to be offered a new Real Madrid deal as he reiterated his desire to stay at the club, although he accepts the decision over his future is not in his hands.

The 34-year-old is closing in on 10 years at the LaLiga leaders, but his contract is set to expire at the end of the season and Manchester City, Paris Saint-Germain and Chelsea are among the clubs linked with moves for the Portugal centre-back.

Pepe suffered a double rib break in Saturday's 1-1 draw with Atletico Madrid that has cast doubt over whether his campaign is over, with the veteran hoping to extend his stay at the club.

"I have already said, I will wait for Madrid until the last second, I sacrifice every day to be here," Pepe said at a supporters' group event on Sunday. "For me it is a great honour to be here.

"I want [the fans] to be very happy because I have always tried to honour this shirt, learning from guys like Raul, showing team spirit and respecting those at the stadium. I always want to give my utmost to try and bring happiness to the supporters.

"Only God knows what my future holds because I have a contract until June 30. I am just focusing on returning as soon as possible to help the team. We are going to give it our all for the rest of the season to win all of the competitions we are in."

Madrid legend Raul also appeared at the supporters' club event, with the former striker keen for Pepe to remain at the Santiago Bernabeu.

"I've been through a lot with Pepe, we have shared things on and off the pitch and I wish you the best in the world," said Raul.

"I would like to still see you wearing the Madrid shirt, hopefully you can stay."