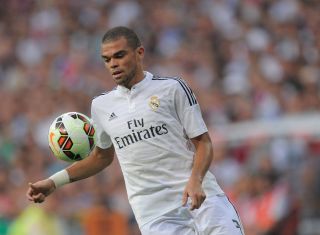 Carlo Ancelotti's men were made to work hard by newly promoted Cordoba at Santiago Bernabeu, but Karim Benzema's first-half header and a long-range strike from talisman Cristiano Ronaldo after the break helped the European champions to three points.

Centre-back Pepe, who made his 250th appearance for Real in the match, believes Real were always in charge of matters in the Spanish capital, and stated that winning was more important than their performance.

"We controlled the match well, people were perhaps expecting a more comfortable win, but we managed to get three points that are important to us," he told the club's official website.

"We're coming off the back of a great season and we'll try and do the same this year, so that we and the fans are happy at the end of it."

Real handed league debuts to big-money signings Toni Kroos and James Rodriguez and the former provided the assist for Benzema's goal with a corner from the right.

The Germany international enjoyed his first taste of La Liga but was keen to turn his attention to Sunday's visit to Real Sociedad.

"This victory is important, the first match of the league is always tough and we managed to win," Kroos commented. "I felt very comfortable on the pitch.

"We've had a series of very intense matches. Now we have a week to prepare for the next one. The visit to Real Sociedad will be difficult but we will go all out for victory in the Anoeta."