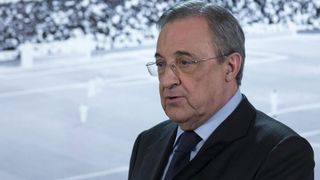 Real Madrid president Florentino Perez is confident the club have the squad to win trophies in 2016.

The Spanish giants failed to lift a trophy in 2015, finishing second in La Liga behind Barcelona and eliminated by Juventus in the semi-finals of the Champions League.

Madrid are third in La Liga and were thrown out of the Copa del Rey for fielding an ineligible player, with pressure mounting on coach Rafael Benitez.

However, Perez remains upbeat about the club's chances in the second half of the season.

"I ask for health for everyone, work, welfare and happiness," he said in a New Year message.

"And those who form part of this great family of Real Madrid enjoy new titles, which I am sure will come because we have great squads in football, and in basketball.

"At Real Madrid we promise to work and we have the responsibility that everyone loves this crest and this shirt, and that they are always proud of this club."