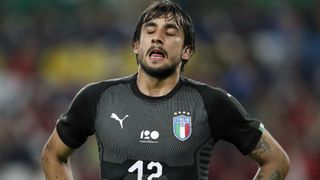 Mattia Perin was not expecting to play alongside Cristiano Ronaldo when he joined Juventus, but he is excited to do so.

Juve paid Genoa an initial €12million to sign the goalkeeper after Gianluigi Buffon confirmed his 17-year stay at Turin would end after the 2017-18 season.

On Tuesday the Bianconeri announced they had shelled out €100m more than the fee for Perin to snare five-time Ballon d'Or winner Ronaldo from Real Madrid.

Perin was not surprised by the bold move from the seven-time defending Serie A champions and is looking forward to getting down to work with the Portugal captain.

"I was not expecting it, but from a club like this you can expect anything," said Perin at his official presentation on Wednesday.

"The news struck me because he is the best player in the world. Being able to train with him, a great professional, like everyone here, is a plus for all of us and for Italian football.

"I thought the arrival of Ronaldo was possible. Juventus are on a par with Real, Barcelona and Bayern Munich.

"If Cristiano had to leave, I thought the most probable destination would be Juventus, and that's how it went."