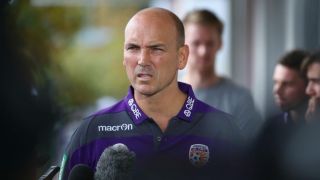 The FFA found Perth "deliberately failed to disclose" 400,000 Australian dollars worth of benefits and payments to six players this season.

As a result, the Glory will be relegated to seventh when the 27 rounds of the A-League season are complete - outside the top-six positions required to compete in the finals.

Perth have led the division for the majority of the campaign and sit second, only behind leaders Melbourne Victory - over whom they have a game in hand - on goal difference.

The Glory were also fined $269,000 for breaching the salary cap for the past two seasons in addition to the 2014-15 campaign.

"As a result of Football Federation of Australia's announcement to eliminate the club from finals football, I can today inform you that the club is taking counsel and considering all avenues available to it," said chief executive Jason Brewer on Friday.

Brewer went on to insist the club's player payments for 2014-15 would fall within the A-League salary cap and that they have fully cooperated with the FFA's investigations.

He added: "Perth Glory fans should be in no doubt that the club will be responding to the FFA determination and that our players will be playing for important points tonight and in the coming weeks."